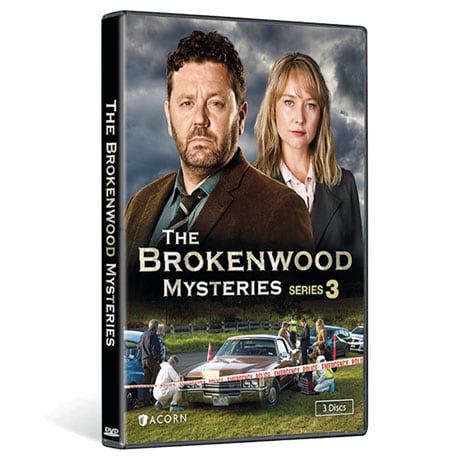 Mike and Kristin return to uncover more macabre events in the sleepy little murder-ridden town of Brokenwood. Once more, they're faced with quirky mysteries; a woman found dead under a giant foam spider; one corpse replaced by another; a classic car buff with a lungful of gasoline. Siphoning, or something more sinister? 4 feature-length episodes, 4 DVDs or 2 Blu-ray discs. SDH. Specify DVD or Blu-ray.

Episodes
The Black Widower
The Frog and Cheetah publican, Ray Neilson, has branched into tourism with his 'Lord of the Ringz Tours.' But when Ray's wife is discovered dead under a giant foam spider, things get mirky. But when the cause of death is revea
DVD Extras Details
Packaging: Boxed set
Run Time: 368 minutes plus bonus programming
Format: Widescreen / 1080p
Number of discs: 4 DVD or 2 Blu-ray discs
Language: English
Foreign Language Subtitles: No
Co