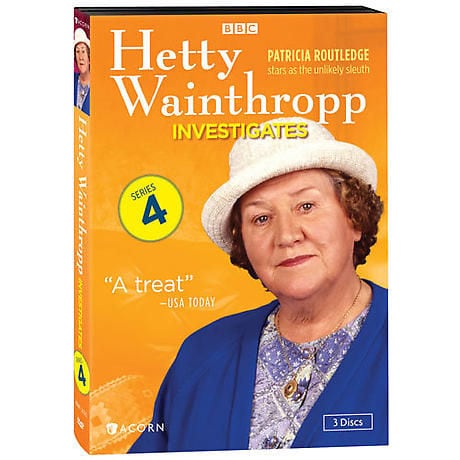 The reputation of the Wainthropp Detective Agency has spread, and Hetty takes on clients beyond the cozy confines of Lancashire in these final six episodes. With her characteristic shrewdness and compassion, she sleuths out truth in a Cumbrian iron mine, a stately country mansion, and a historic coastal fishing village. As always, Hetty gets plenty of help from her sidekick, Geoffrey (Dominic Monaghan, Lost, The Lord of the Rings trilogy), and husband, Robert (Derek Benfield, Rumpole of the Bailey), even though Geoffrey has fallen in love and Robert has discovered a passion of his own. 6 mysteries, 3 DVDs, approx. 5 hours.

Episodes
Disc 1
Episode One: Something to Treasure
A miner's widow in Cumbria enlists the agency to find a missing book penned by her late husband. But is she really after a book or a map to hidden treasure?