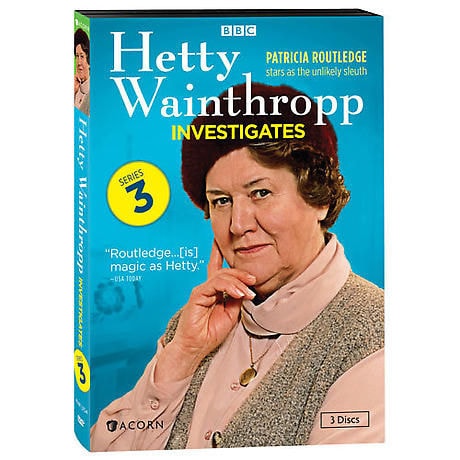 The late-blooming gumshoe's uncanny ability to blend in with her surroundings allows her to investigate people from all walks of life, from marauding hooligans to high-society brides. Detective Chief Inspector Adams has come to rely on Hetty for sensitive cases. Hetty is flattered but clearly states her limits: "No sex scandals, no divorce, no drug running, and no industrial espionage." Still, she finds plenty of excitement in these nine new cases solved with the help of her young assistant, Geoffrey (Dominic Monaghan, Lost, The Lord of the Rings trilogy), and devoted husband, Robert (Derek Benfield, Rumpole of the Bailey). 9 mysteries, 3 DVDs, approx. 71/2 hours.

Episodes
Disc 1
Episode One: All Stitched Up
A teenage pyromaniac is terrorizing a neighborhood, but the police are stymied by frightened victims refusing to testify against him. Posing as the Irish sister-in-law of one of the residents, Hett
DVD Extras Details
Packaging: Boxed set
Run Time: 441 minutes
Format: Full screen
Number of Discs: 3
Language: English
Subtitles: No
Color or B&W: Color
CC: Yes, main program only
SDH: No