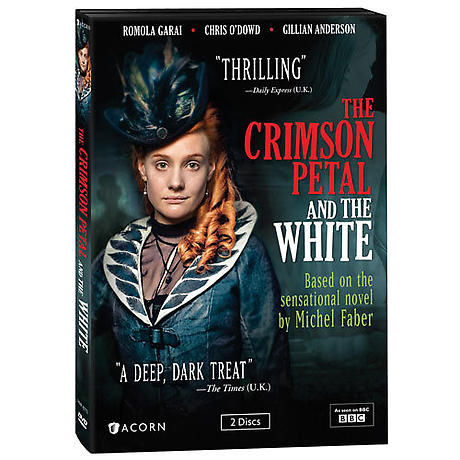 Sugar (Romola Garai, Atonement) is a notorious prostitute who longs for a better life. Sexually adept and clever, she casts a spell on William Rackham (Chris O'Dowd, Bridesmaids), heir to a perfume business. Based on the sensational novel by Michel Faber, made for the BBC, this psychological thriller boasts a stellar cast (Gillian Anderson, Richard E. Grant) and a boldly original look and feel, portraying 19th-century London as a place of violence and madness. Seen on Encore. 4 episodes, 4 hrs, 2 DVDs, SDH. Mature audiences.

Episodes
Disc 1
Episode 1
William Rackham is a failure as a writer, deeply in debt, and husband to an increasingly unstable wife. When his father cuts off his allowance, William seeks solace with a prostitute, Sugar, and discovers that she's a
DVD Extras Details
Packaging: Boxed set
Run Time: 244 minutes, plus bonus programming
Format: Widescreen
Number of Discs: 2
Language: English
Subtitles: No
Color or B&W: Color
CC: No
SDH: