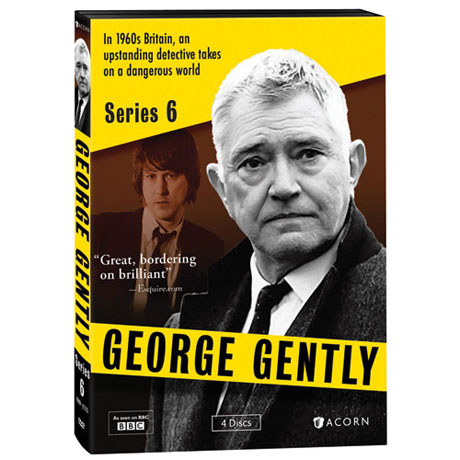 Detective Chief Inspector George Gently (Martin Shaw, Death in Holy Orders) returns to the job six months after he and his sergeant, John Bacchus (Lee Ingleby, Place of Execution), were gravely injured in a shootout in the line of duty. Both officers appear to be on the mend, physically at least. But while Gently is intent on putting the incident behind him, Bacchus clearly is not-and shocks his boss by submitting a letter of resignation.

At a time of changing attitudes and values in Britain, Gently and Bacchus are undergoing transitions of their own. In these four new episodes set in 1969, Bacchus lets a new constable's (Lisa McGrillis, Hebburn) modern ways of policing get under his skin, while an aging Gently finds himself more and more adrift in a rapidly evolving world. Guest stars include Jemma Redgrave (Bramwell) and Robert Pugh (Game of Thrones). 4 episodes, 4 DVD or 2 Blu-ray discs, approx. 369 minutes, SDH.

Episodes
Disc 1
Gently Between the Lines
Gently investigates a death in police custody-and insists that Bacchus assist him, even though his sergeant has just submitted his formal resignation. In the process, the inspector has to tread a carefu
DVD Extras Details
Packaging: Boxed set
Run Time: 369 minutes, plus bonus programming
Format: Widescreen
Number of Discs: 2
Language: English
Subtitles: No
Color or B&W: Color
CC: No
SDH: