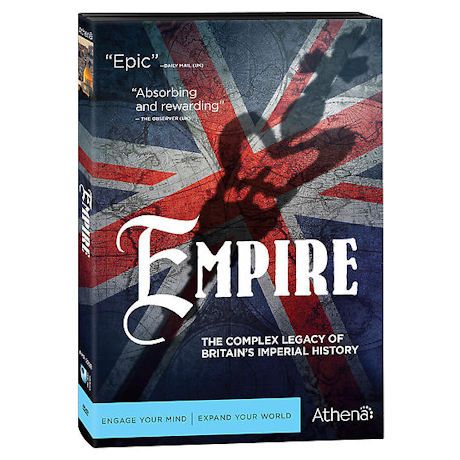 How did a small island nation end up ruling a quarter of the world's population? Filmed on location in former British colonies, this documentary series charts the rise of the British Empire and the source of conflicts that still reverberate today. Written and presented by BBC broadcast journalist Jeremy Paxman, based on his book Empire: What Ruling the World Did to the British. Empire includes 5 episodes, 2 DVDs, SDH, viewer's guide. From Athena.


Episodes
Disc 1
Episode 1: A Taste for Power
In India, the British learn the art of imperialism, using local rulers and troops to maintain power. But it is little more than a confidence trick, an enormous bluff--and as the mutiny of 1857 shows,
DVD Extras Details
Packaging: Boxed set
Run Time: TBD
Format: Widescreen
Number of discs: 2
Language: English
Subtitles: No
Color or B&W: Color
CC: No
SDH: Yes
Region Code: 1