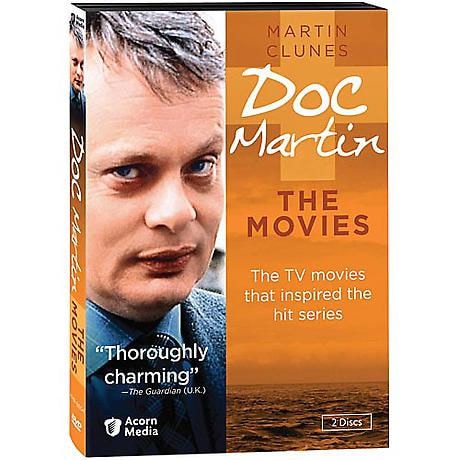 There's more than one way to tell a good story, and Doc Martin is no exception. Before the hit series launched in 2004, two made-for-TV movies introduced the main character and the picturesque Cornish fishing village of Port Isaac (later called Portwenn). Martin Clunes (Men Behaving Badly) stars in both feature-length. Here the doctor's last name is Bamford, not Ellingham. He's an obstetrician, not a surgeon, and his reasons for leaving London are more personal than professional. He's not yet rude, irascible, and socially inept, and he even smiles, but we get early glimpses of his selfishness, short temper, and distaste for dogs. In Doc Martin, the doctor flees to a coastal village to reassess his marriage and his career. In Doc Martin and the Legend of the Cloutie, he resorts to camouflage, subterfuge, and magic to get what he wants: a house in the country. 2 episodes, approx. 162 min. on 2 DVDs.

Episodes
Disc 1
Doc Martin
After learning that his wife has been cheating on him, Doctor Martin Bamford impetuously leaves London for a week in a coastal village he visited as a child. Charmed by the scene
Details
Packaging: Boxed set
Run Time: 162 minutes
Format: Widescreen
Number of Discs: 2
Language: English
Subtitles: No
Color or B&W: Color
CC: No
SDH: Yes
Region Code:<
Press
"Thoroughly charming" --The Guardian (UK)