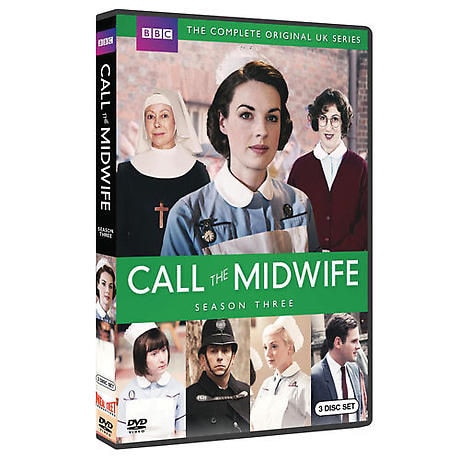 What a relief! All the young midwives and good sisters return in the new season of the BBC's immensely absorbing and popular drama, set in poverty-ridden East London in the late 1950s.
With Nonnatus House scheduled for destruction, Jenny (Jessica Raine), Chummy (Miranda Hart), and Sister Julienne (Jenny Agutter) search for a new location as Jenny's relationship with Alec continues to bloom. Based on the best-selling memoirs of Jennifer Worth, set in the late 1950s, narrated by Vanessa Redgrave, this hit British series is a fascinating look at midwifery, family life, and the plight of the poor and female. Seen on PBS. 10 episodes plus the 2013 Christmas special, 9 1/2 hrs, 3 DVDs.

Episodes
Christmas Special
Nonnatus House and the surrounding area is evacuated when an unexploded bomb is found nearby. Shelagh has doubts about her wedding to Patrick, and Jenny and Trixie help a man who is suffering from shell shock.