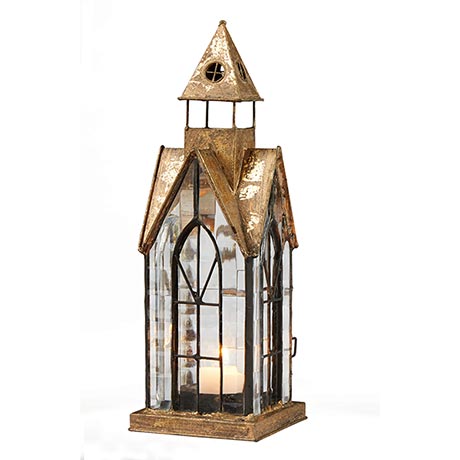 Inspired by historic English architecture, this sweet lantern is reminiscent of the beautiful churches in the Hampton area outside of London. The Anglo-Saxon parish of Hampton included present-day Hampton, Hampton Hill, Hampton Wick and the hamlet of Hampton Court surrounding Hampton Court Palace which are together called the Hamptons. The name Hampton may come from the Anglo-Saxon words hamm meaning an enclosure in the bend of a river and ton meaning farmstead or settlement. Hampton is a suburban area of London, centered on an old village on the north bank of the River Thames, in England. Historically part of Middlesex. The population is about 18,000. Hampton is an historic area of London, England. Hampton Court Palace, built by Cardinal Wolsey in 1515, was appropriated by Henry VIII in 1526. George II (1683 - 1760) was the last to use it as a royal residence, and much of the palace is now open to the public. Features beveled glass panes set in metal frames. Use indoors or outdoors; alone or in a grouping. Use tea light candles only. We recommend battery operated tea lights. 4" square, 12" high.