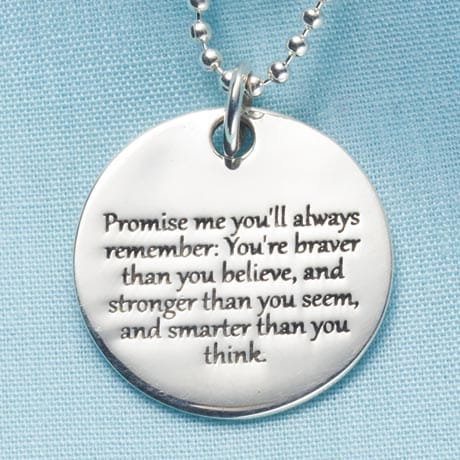 $49.95
119 Reviews Write a Review
Item #: HN1486
EXCLUSIVE!  A Signals bestseller in sterling silver, inspired by the "Winnie-the-Pooh stories by A.A. Milne. Words said by Christopher Robin to his best friend and "bear of little brain," Winnie-the-Pooh. Engraved on front with "Promise me you'll always remember: You're braver than you believe, and stronger than you seem, and smarter than you think." Engraved on back with "Christopher Robin." Sterling END_OF_DOCUMENT_TOKEN_TO_BE_REPLACED
Add to Wish List