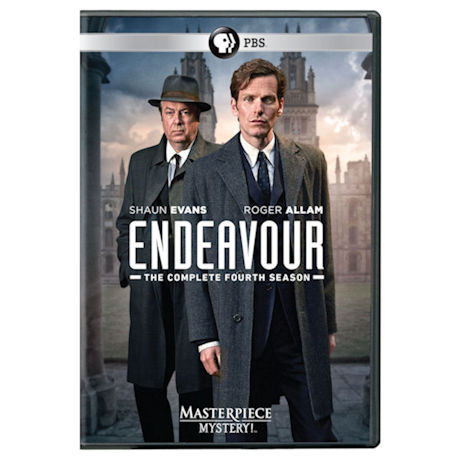 Shaun Evans, charms audiences with his portrayal of the younger version of crusty Inspector Morse in this highly successful and cerebral prequel. Season 4 is set in 1967 as the Cold War and sixties counterculture begin to affect life in Oxford. DC Endeavour Morse awaits the result of his Sergeant's Exam, while DI Fred Thursday and his wife Win struggle to cope with their children flying the nest; Sam gone to the Army and the traumatized Joan, gone off to who knows where? 480 minutes on 2 DVD or Blu-ray discs. SDH. Mature audiences.

We regret we cannot ship this title to Canada.

Item can only be shipped within the Continental US.
Episodes
Episode 1: Game
Endeavour finds himself consumed by a nightmarish case hunting a serial killer; he must race against time to find the connection between a chess-playing "thinking" machine and a baffling drowning.
Episode 2: Canticle
When moral crusader Joy Pettybon receives a death threat, Endeavour must protect her at all costs. But the arrival of a rebellious band quickly drags Endeavour into a bloody war of social attitudes that just had its first fatality.
Episode 3: Lazaretto
Whispers of a cursed hospital ward and a seemingly innocuous death begin a chain of events that lead Endeavour to investigate the dark depths of Oxford's medical community.
Episode 4: Harvest
The extraordinary discovery of a 2,000 year old body leads Endeavour and Thursday to investigate the eerie village of Bramford, where nature is pitted against man and pagan rites hide nuclear mysteries.
Details
Packaging: Boxed
Run Time: 8 hrs
Format: Widescreen
Number of discs: 2
Language: English
Foreign Language Subtitles: No
Color or B&W: Color
CC: No
SDH: Yes
Region Code: 1
Aspect Ratio: 16:9
Rating: NR
Cast
Shaun Evans, Roger Allam, Anton Lesser