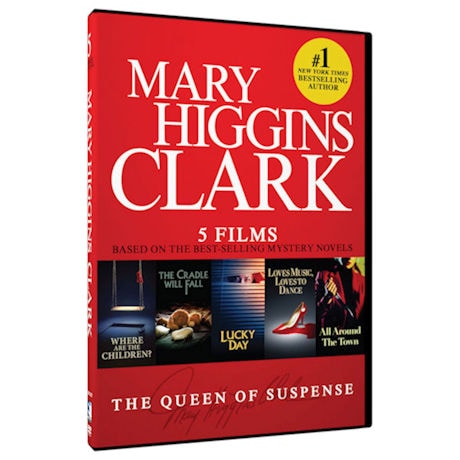 No Reviews Write the First Review
Item #: XB5442
With more than 100 million books sold, Mary Higgins Clark is the reigning Queen of Suspense. This set gathers made-for-TV movies of 5 of her popular books.
Add to Wish List

With more than 100 million books sold, Mary Higgins Clark is the reigning Queen of Suspense. This set gathers made-for-TV movies of 5 of her popular books.

Where are the Children? (1986)
Nancy Eldridge (Jill Clayburgh) is a young mother faced with the nightmarish disappearance of her children. After being wrongly convicted of murdering her son and daughter from a previous marriage, Nancy s new life is once again torn apart when her second family vanishes.

The Cradle Will Fall (2004)
Prosecutor Katie De Maio (Angie Everhart) is investigating the suicide of a pregnant woman who used the same clinic as her. When it begins to look like murder instead, the suspects become themselves become victims and Katie fears a serial killer is on the loose and she is the next patient.

Lucky Day (2002)
After winning the lottery, Bill Regan is killed. His best friend, Nora, investigates Bill's last few hours prior to his murder. Plot twists and numerous suspects abound in this engaging mystery as she retraces Bill's path the day that he vanished.

Loves Music, Loves to Dance (2001)
A talk show producer faces her own guilt when she discovers that her best friend was murdered after answering an online personal ad. Against the wishes of Detective D'Salva, she begins a treacherous dating game, drawing the killer's sights to her.

All Around the Town (2002)
Kidnapped as a child, 21-year old Laurie is now accused of murdering her popular English professor. While Laurie's family sets out to prove that she suffers from multiple personality syndrome, the professor's wife (Kinski) is left alone to avenge her husband's death.