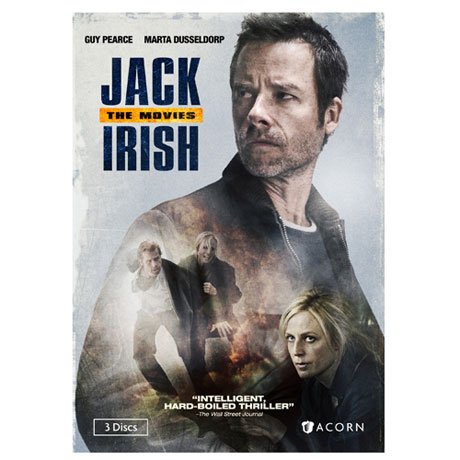 EXCLUSIVE! Emmy® winner Guy Pearce (Memento, Iron Man 3) is Jack Irish, the brooding Australian antihero of Peter Temple's award-winning crime novels. A former lawyer reeling in the wake of his wife's murder, he reinvents himself as a part-time private investigator and full-time alcoholic, then takes on cases that plumb the depths of Australian society. In Bad Debts, he uncovers corruption. In Black Tide, he helps an old family friend whose son has gone missing. In Dead Point, Jack is commissioned to locate a mysterious red book, but anyone who touches it turns up dead. With Marta Dusseldorp (A Place to Call Home) as journalist Linda Hillier, who sees the honorable man behind the disheveled exterior. "Intelligent, hard-boiled thriller"-Wall Street Journal. 3 feature-length mysteries, over 4 3/4 hrs, 3 DVD or Blu-ray discs, SDH. Mature audiences.