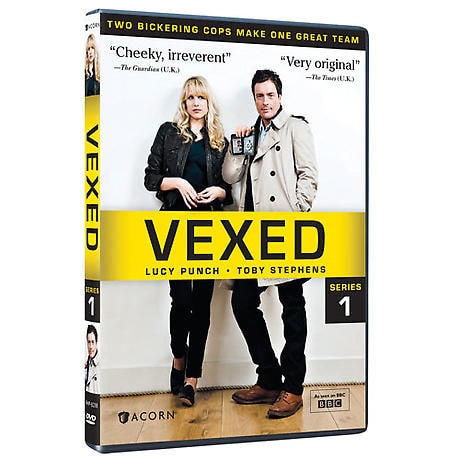 He's lazy, disorganized, charming, and more interested in having a good time than solving crimes. She's dedicated, efficient, determined to succeed at her new job, and worried that her marriage might be falling apart. Thrown together as partners on the London police force, the two mismatched detectives solve crimes with more luck than skill, bickering and bantering along the way.

Toby Stephens (Jane Eyre, Die Another Day) is D.I. Jack Armstrong, and Lucy Punch (Hot Fuzz, Doc Martin) plays D.I. Kate Bishop in a fresh approach to the cop drama. As they hunt for a serial killer who targets lonely women, investigate the attempted murder of a cranky banker, and cope with a high-profile kidnapping, Jack and Kate learn about each other, disagree on almost everything, and discover they're not such an odd couple after all. Featuring a sexy, attractive cast, and sprinkled with jokes and repartee, Vexed is "more comedy than drama...[and] lots of fun" (The Times, U.K.). 3 episodes, 1 DVD, approx. 180 minutes, SDH.