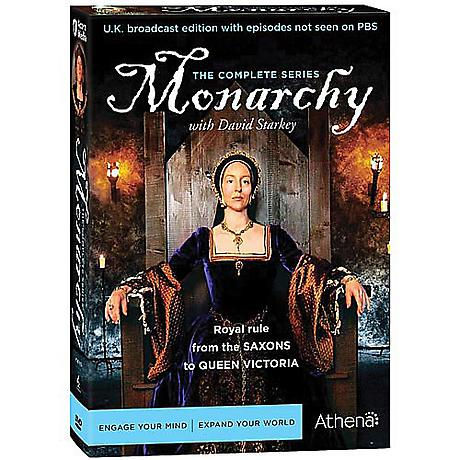 The English Crown is one of the oldest surviving governing bodies in the world. Hosted by the erudite, energetic Dr. David Starkey (The Six Wives of Henry VIII), this series tells the epic and bloody stories of Britain's kings and queens from the Saxon era (Alfred the Great) to the early 20th century (Victoria). Filmed on location in castles, churches, and battlegrounds, the complete UK broadcast edition includes episodes not seen on PBS. 16 episodes; approx. 13 hours 25 min. on 5 DVDs plus viewer's guide. SDH subtitles.

Episodes
Disc 1
Episode 1: A Nation State
The unique idea of a monarch who is answerable to the people has its roots in early Anglo-Saxon kings such as Alfred the Great, the intellectual warrior who united England.