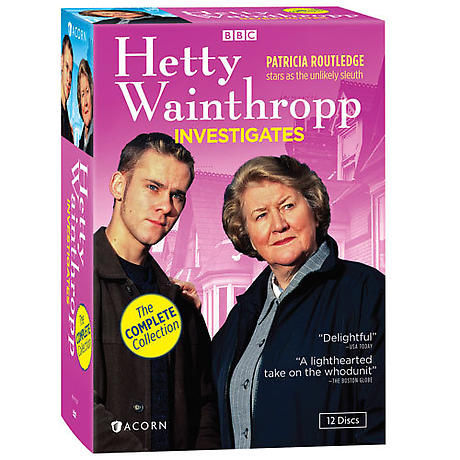 Acclaimed actress Patricia Routledge (Keeping Up Appearances) brings her genius for wry comedy and warmhearted drama to the role of housewife-turned-private-investigator Hetty Wainthropp. Like an earthier Miss Marple, Hetty applies her seasoned intuition and fierce moral compass to the job of righting wrongs in England's towns and villages. With the support of her teenaged sidekick, Geoffrey (Dominic Monaghan, Lost, The Lord of the Rings trilogy), and devoted husband, Robert (Derek Benfield, Rumpole of the Bailey), she grows from a most unlikely sleuth into an experienced and respected detective.

Episodes
Series 1
Disc 1
Episode One: The Bearded Lady
At 60, Hetty refuses to become a sedentary senior citizen. She wants to count for something and make some money, since she doesn't have a pension of her own. A job at the post o
DVD Extras Details
Packaging: Boxed set
Run Time: 221/2 hours
Format: Full screen
Number of Discs: 12
Language: English
Subtitles: No
Color or B&W: Color
CC: Yes, main program only
SDH: N