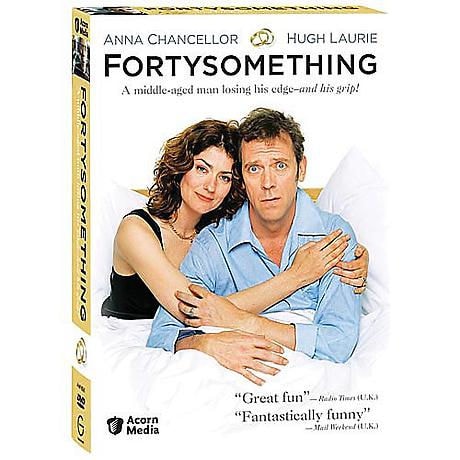 Golden Globe winner Hugh Laurie (House) is Paul Slippery, a British doctor in the midst of a midlife crisis. His wife, Estelle (Anna Chancellor), has embarked on a new career and perhaps an extramarital love affair or two. His three oversexed sons mock him without mercy, and at work he's tormented by a flaky colleague. Filmed for Britain's ITV, this series is high comedy of the kookiest kind. Six episodes; approx. 294 min. on 2 DVDs.

"FORTYSOMETHING Before he starred as a dyspeptic genius physician on "House," Hugh Laurie starred as a dyspeptic physician in the thrall of a midlife crisis in the British comedy "Fortysomething." Here he plays Paul Slippery, a man dealing with his wife's professional turnaround and her possible wandering eye. At work he is mired in bureaucracy and at home he is given little reprieve, tortured as he is by his three sex-obsessed sons. The series, which was shown in 2003, is six episodes long; Mr. Laurie directed the first three. What "House" fan is likely to return it? "

Episodes
Disc 1
Episode 1
On the day that his life begins to fall apart, Paul Slippery frantically tries to find his friend and patient, Nobby, before the man can indulge in a potentially disastrous dose of Viagra. Meanwhile, Paul's wife, Estelle,

"An absolute must for Hugh Laurie fans."--Exclusive Magazine

"A very good series. If you are a fan of Hugh Laurie, pick this