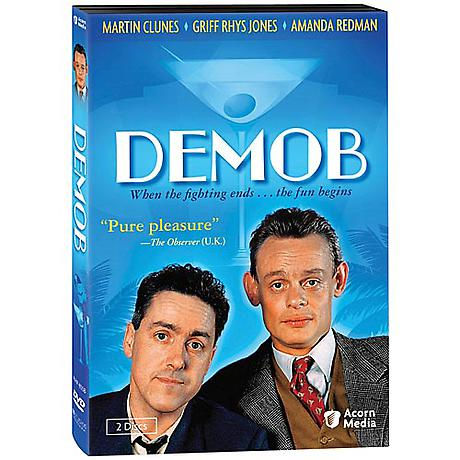 As WWII ends, British soldiers are demobilized ("demobbed") and returned to civilian life. Captain Ian Deasey (Griff Rhys Jones, Alas Smith & Jones) and Corporal Dick Dobson (Martin Clunes, Doc Martin) spent much of the war entertaining the troops with their bawdy stage routines. Back in dreary London, they can't resist the lure of the footlights, risking a marriage and tangling with a con man. Sharp writing and a stellar cast made this British drama series "pure pleasure" (Observer, UK). 6 episodes, 5 hrs, 2 DVDs, SDH. For mature audiences.

Episodes
Disc 1
Episode 1
With the war over, the two friends go their separate ways--Deasey to his family, and Dobson to some shady new acquaintances. For both men, though, the lure of the footlights proves impossible to resist.