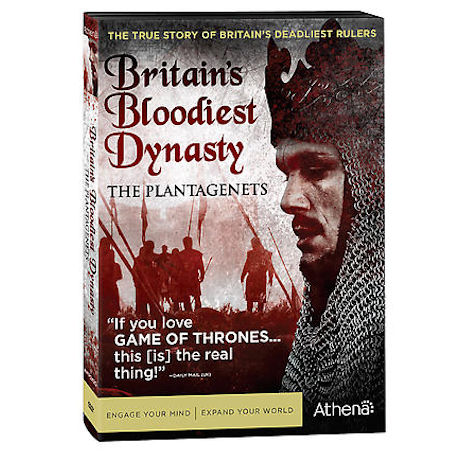 A control-freak king, betrayed by his own family after an archbishop's murder. A friendship that collapses into civil war. A revenge-obsessed ruler, and the rise of a vicious despot. Compared to the real-life Plantagenets, the dynasty that dragged Britain out of the Dark Ages into the modern world, Game of Thrones looks almost tame. Presented by acclaimed historian Dan Jones, based on his best-selling book The Plantagenets, this roaring British docudrama is "a solid slab of history ... tasty and nutritious at the same time" (Guardian, UK). Jones calls it "big, bloody and thrilling." 4 episodes, 3 1/4 hrs, 2 DVDs, SDH, viewer's guide. From Athena.

Episodes
Disc 1
Episode 1: Betrayal
Warrior, empire-builder, and founder of the dynasty, Henry II transforms England from a war zone into a superpower. But murder and betrayal by his own family puts in jeopardy everything he has achieved. W
DVD Extras Details
Packaging: Boxed set
Run Time: 188 minutes
Format: Widescreen
Number of discs: 2
Language: English
Subtitles: No
Color or B&W: Color
CC: No
SDH: Yes
Region Code:<