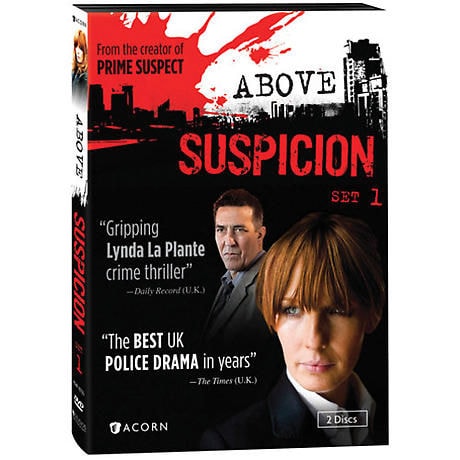 One her first day on the job, rookie detective Anna Travis (Kelly Reilly, Sherlock Holmes) throws up at a crime scene and faints at a postmortem. Does she have what it takes to succeed in what's still mostly a man's world? Based on the best-selling novels by Lynda La Plante, this hit British drama is a "younger, sassier successor to Prime Suspect" (Telegraph, UK). With Ciaran Hinds (There Will Be Blood) as DCI Langton, Anna's brusque boss. 5 episodes, 5 hrs, 2 DVDs, SDH. Mature audiences.

Episodes
Disc 1: Above Suspicion
Part 1
For eight years, someone has been murdering women, following the same brutal ritual each time. The most recent victim doesn't fit the profile, but evidence links her to the others. Anna volunteers to
DVD Extras Details
Packaging: Boxed set
Run Time: 254 minutes
Format: Widescreen
Number of discs: 2
Language: English
Subtitles: No
Color or B&W: Color
CC: No
SDH: Yes