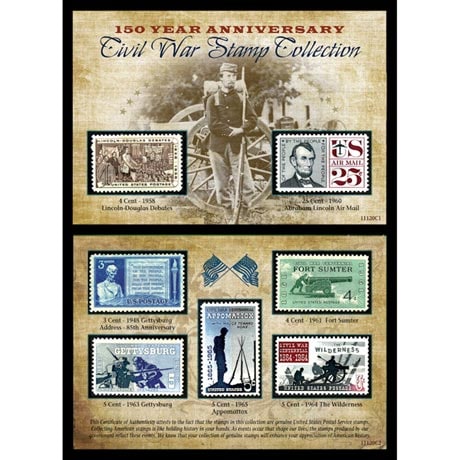 Honor America's past with this 150th Anniversary Civil War Commemorative Stamp Collection. The collection begins by showcasing President Abraham Lincoln with a 1958, 4-cent Lincoln-Douglas Debate Stamp and a 1960, 25-cent Lincoln Air Mail Stamp. The Lincoln-Douglas Debates occurred in 1858 and were held in 7 sites gaining national attention. The Lincoln Air Mail Stamp shows a portrait of Abraham Lincoln with a phrase from his famous Gettysburg Address, "Of the People, By the People, For the People," framing his head. The collection continues with commemorative stamps covering significant moments leading up to and during the civil war, a 1948, 3-cent Gettysburg Address Stamp, a 1961, 4-cent Fort Sumter Stamp, a 1963, 5-cent Gettysburg Battle Stamp, a 1964, 5-cent The Wilderness Stamp and a 1965, 5-cent Battle of Appomattox Stamp. On April 12, 1861, the Confederate Army fired a shot on a Federal Fort to begin the United States Civil War. On April 9, 1865, Confederate General Robert E. Lee fought his last battle at the Appomattox Courthouse before surrendering to Union General Ulysses S. Grant. Allow 2-3 weeks, no rush delivery or gift box.

Item can only be shipped within the Continental US.
Please note: Delivery time for this item is 2-3 weeks.