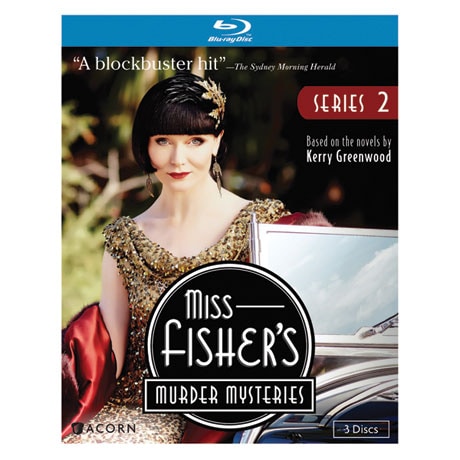 A glamorous lady detective in 1920s Melbourne, the Honorable Phryne (fry-nee) Fisher is a thoroughly modern woman, armed with a pearl-handled revolver and dagger-sharp wit. This stylish Australian series based on the best-selling novels by Kerry Greenwood. "Blithe and snappy"-Seattle Times. Specify DVD or Blu-ray. Series 3 - 8 episodes; series 1 & 2: 13 episodes.

Disc 1
Episode 1: Murder Most Scandalous
Jack's ex-father-in-law- the deputy commissioner of police-is implicated in the murder of a prostitute, and Jack and Phryne combine their efforts to get to the bottom of the case. While Jack p

5 star rating 2 Reviews
2 Reviews
M
MARY T.
Verified Buyer
5.0 star rating
01/05/22
I Love Miss Fisher
Review by MARY T. on 01/05/22 review stating I Love Miss Fisher
I have enjoyed the series, and now I can watch any time and share it with friends.
Miss Fisher's Murder Mysteries Series 2 DVD & Blu-ray
A
ANN W.
Verified Buyer
5.0 star rating
05/07/17
It was fun and made
Review by ANN W. on 05/07/17 review stating It was fun and made
It was fun and made a great Saturday evening looking at this program for my self and husband.
Miss Fisher's Murder Mysteries Series 2 DVD & Blu-ray
Get the latest deals and more. Sign up now and get 10% OFF your order!