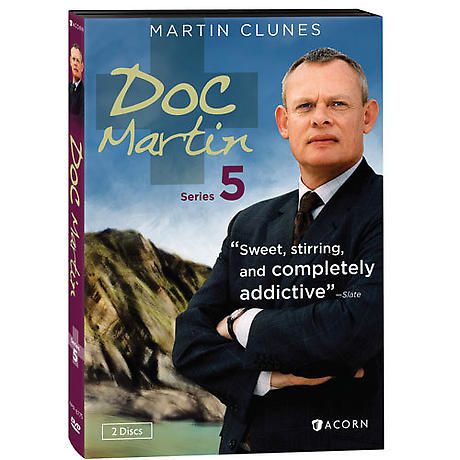 Fatherhood hasn't softened the dour Dr. Martin Ellingham (Martin Clunes, Men Behaving Badly). He's about to take a new position in London when events conspire to keep him in Portwenn. His infant son with Louisa (Caroline Catz, Murder in Suburbia) needs a name, his replacement doesn't seem up to the job, and he receives devastating news. Like it or not, he's stuck in the scenic Cornish village with its quirky inhabitants-most of whom have grudgingly grown rather fond of the grumpy doctor. Although Martin has largely mastered his fear of blood, he still has no clue how to manage his life. Should he marry Louisa? Can he be a good father? Will he bring his new family to London? How can he cope with sleepless nights, an aunt with issues, a flaky new receptionist, Louisa's hippie mother, and the usual village dramas? This season, Emmy®-winner Eileen Atkins (Cranford) joins the cast of the award-winning British drama. 8 episodes, approx. 367 min. on 2 DVDs.

Episodes
Disc 1
Episode 1: Preserve the Romance
Doc Martin's return to London is delayed by the birth of his son, the arrival of an incompetent replacement at his Portwenn practice, and the sad news of a sudden death. He temporarily moves in
DVD Extras Details
Packaging: Boxed set
Run Time: 368 minutes, plus bonus programming
Format: Widescreen
Number of Discs: 2
Language: English
Subtitles: No
Color or B&W: Color
CC: No
SDH: