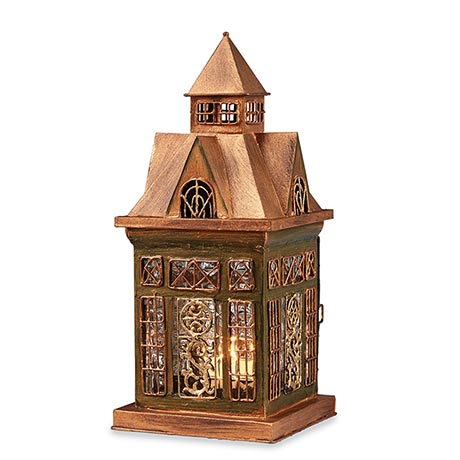 Inspired by English architecture, this lantern will add a rich and warm glow wherever it is placed. Ellington is a small village located on the coast of the historic county of Northumberland in the north of England. The name Ellington is of Saxon origin and is thought to mean descendants of Ella. Ellington has passed through many hands in its recorded history. Originally, the manor of Ellington was thought to belong to Adam de Periton in 1240 and later passed by marriage to the ancient families of Vescy and Welles. Various other families have owned the Ellington manor. Ellington is well known as being a colliery (coal mine) village but has been a thriving community long before the opening of the Colliery. There are several other Ellington's in Great Briton including one in the county of Huntingdonshire that dates back to the 10th century and another in Cambridgeshire County, East Anglia, located north of London. Features beveled glass panes set in metal frames. Use indoors or outdoors; alone or in a grouping. Use tea light candles only. We recommend battery operated tea lights. 5" square, 10 1/2" high.