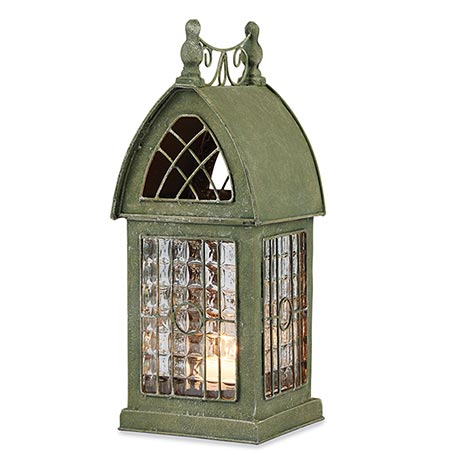 A light for the darkest night and comfort to all who look upon it. This lantern has the appearance of a building both ancient and revered. Durham is a city located in the county Durham in the northeast of England. Archeological evidence shows there has been a settlement in this area since 2000 BC. The name "Durham" comes from the Old English "dun" meaning hill and the Old Norse "holme" which means island. Durham is indeed a hilly area well known for its Norman cathedral and 11th century castle (the site of Durham University since 1832). The name has also been attributed to the legend of the Dun Cow and the milkmaid who in legend guided the monks of Lindisfarne carrying the body of St Cuthbert to the site of the present city in 995 AD. The legend of St Cuthbert is told in a Victorian relief stone carving on the south face of the cathedral. St Cuthbert's remains are still enshrined at the Cathedral as well as the remains of St Bede. St Cuthbert is known for his miraculous healing powers, being known as the "wonder worker of England" and also because his body was found to be incorruptible. Little has changed in Durham over the last 200 years. It is made of the peninsula containing the cathedral, palace green and Durham Castle (founded in 1093 AD). The castle has inspired and delighted visitors for centuries. Sir Walter Scott was so inspired by the cathedral that he wrote "Harold the Dauntless", a poem about Saxons and Vikings set in County Durham, published January 30, 1817. The following lines from the poem are carved into a stone tablet on Prebends Bridge: Grey towers of Durham/ Yet well I love thy mixed and massive piles/ Half church of God, half castle 'gainst the Scot/ And long to roam those venerable aisles/ With records stored of deeds long since forgot. Features beveled glass panes set in metal frames. Use indoors or outdoors; alone or in a grouping. Use tea light candles only. We recommend battery operated tea lights. 4 1/4" square, 10 1/2" high.